Why is my Evergreen Turning Brown?

You may think that the name says it all, but evergreen needles don’t actually stay green forever. Each species of evergreen tends to keep its needles for a defined length of time. That means it is normal even for evergreen trees to lose some needles in autumn.  The needles will turn yellow or brown before falling. Older, inner needles discolor and drop off after one or more years, depending on the species. 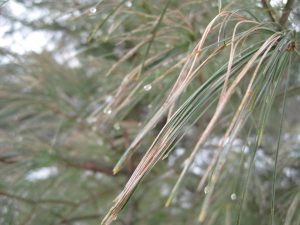 Seasonal needle loss can look very dramatic on some evergreens like white pine, arborvitae, or Hinoki cypress. The tree may even look like it is dying. To know if your tree is experiencing normal needle drop or if there is another issue, you can check the location of the browning. Normal needle drop causes the tree to have a fairly uniform brown appearance to the inner foliage (oldest needles). These needles will eventually drop out and the tree will look healthy again.

While seasonal needle loss is normal, there are other reasons an evergreen may lose its needles that indicate signs of an issue.  Diseased evergreens often have brown needles. This typically shows up in patches around the tree. Even after the dead needles fall off, the tree will still look unhealthy.  Rhizosphaera needlecast and diploadia tip blight are two common examples. Cytopsora canker of spruce can also cause browning of needles and death of lower branches. 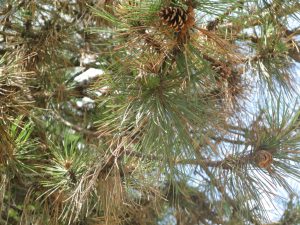 In some cases, needle browning may by a sign of needlecast disease.

Environmental conditions are another factor to consider when needle browning occurs. Extended dry weather and lack of water may be the culprit. Other weather conditions may have an impact including cold winter temperatures and temperatures that fluctuate above and below freezing.

When an evergreen is browning it’s best to determine the underlying cause. It may simply be normal loss of needles, but it can also be a warning sign that something is amiss.