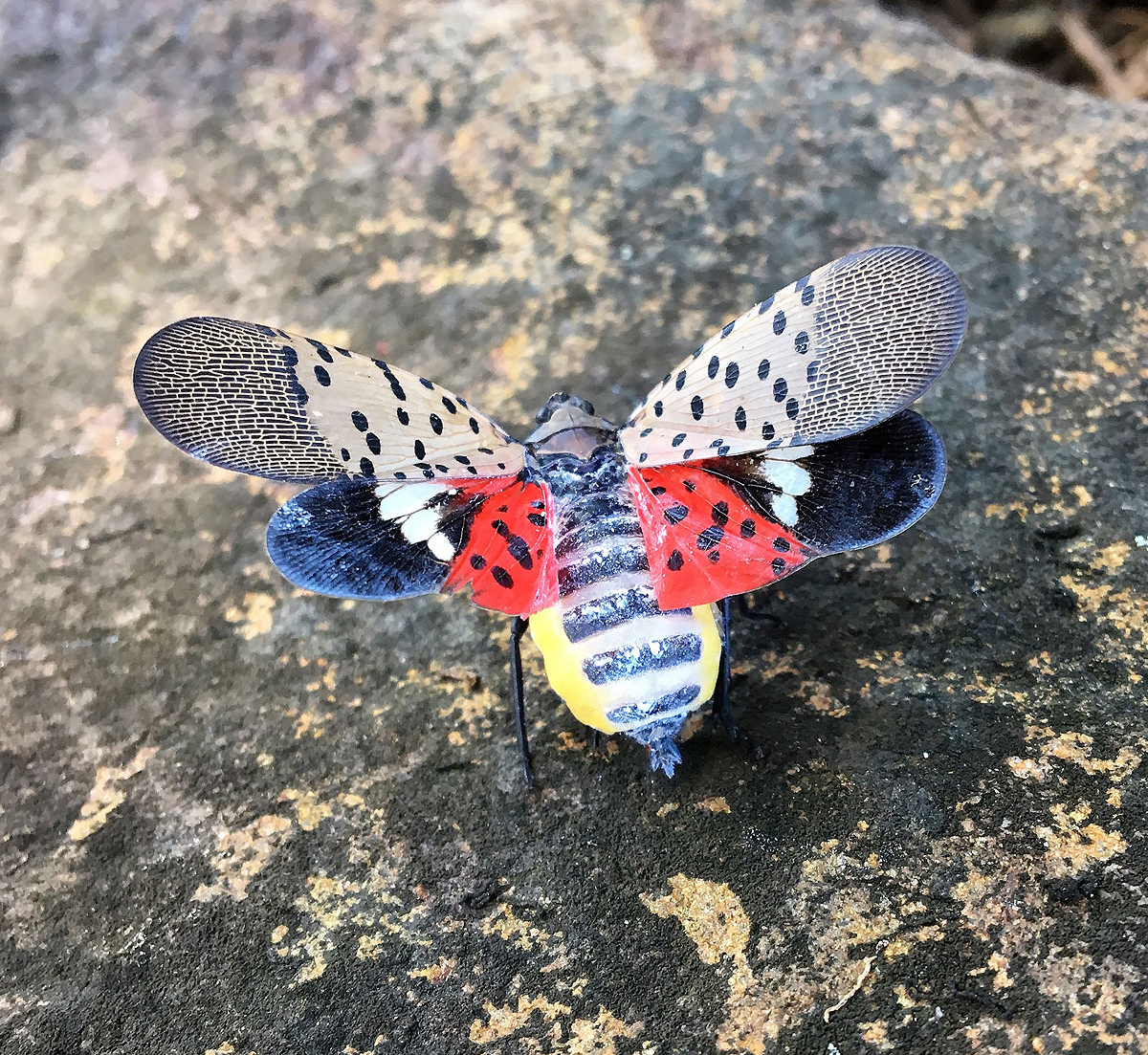 The spotted lanternfly is an invasive species. It is a planthopper insect that was first discovered in the U.S. in 2014. Native to China and other parts of Asia, the insect was accidentally introduced into our country, where it has few natural predators. Though they are capable of flight, spotted lanternflies generally hop or jump from plant to plant. The spread of spotted lanternfly happens quickly. The insects themselves or their egg masses (residing on firewood or even on vehicles) are easily spread to new areas, where the pest can then become established.

Spotted lanternfly is a sap-sucking insect which means it survives by sucking sap and other tree nutrients from the host plant. The insects prefer to feed and lay eggs on Tree of Heaven (Ailanthus altissima), but are not limited to this species. Over 65 potential host species have been identified including hickory, maple, pine, poplar, red oak, walnut, plums, cherries, apple, hops, and grape vines. As they often feed in large groups, plant damage can be significant.

Adult spotted lanternflies are about one-inch long and a half-inch wide. They have a distinctive appearance with spotted front wings. The hind wings are also spotted, but have eye-catching patches of red and black and a single band of white. When the wings are folded, the insects are well-camouflaged against tree bark, but when the wings extend, the vibrant red is clearly visible. The juvenile nymphs are black with white spots. As they grow, nymphs become red and black but still maintain their white 'polka dots.'

First found in Berks County, Pennsylvania, the spotted lanternfly has been confirmed in much of southeastern Pennsylvania. Other Mid-Atlantic states including New Jersey, New York, Delaware, Maryland and Virginia have reported sightings of live insects, though not yet in large numbers.

Eggs laid the previous year hatch from May through June and the juvenile insects actively feed and grow throughout summer. They reach the adult stage as early as July with females laying eggs from late September through the beginning of winter in December. 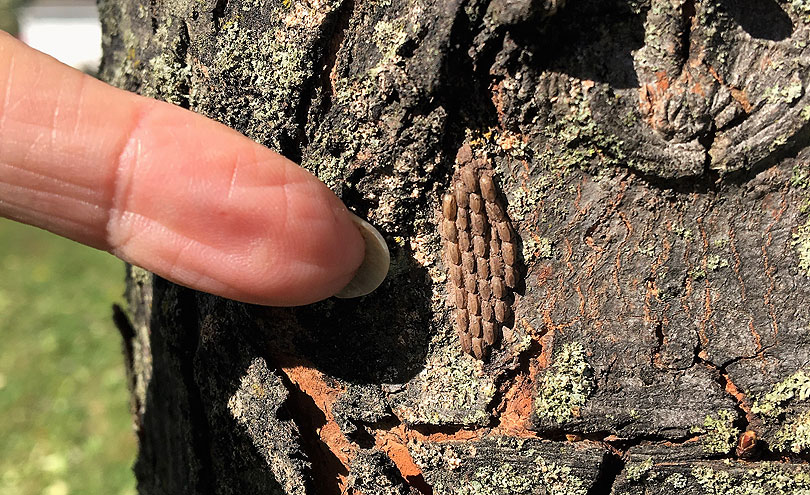 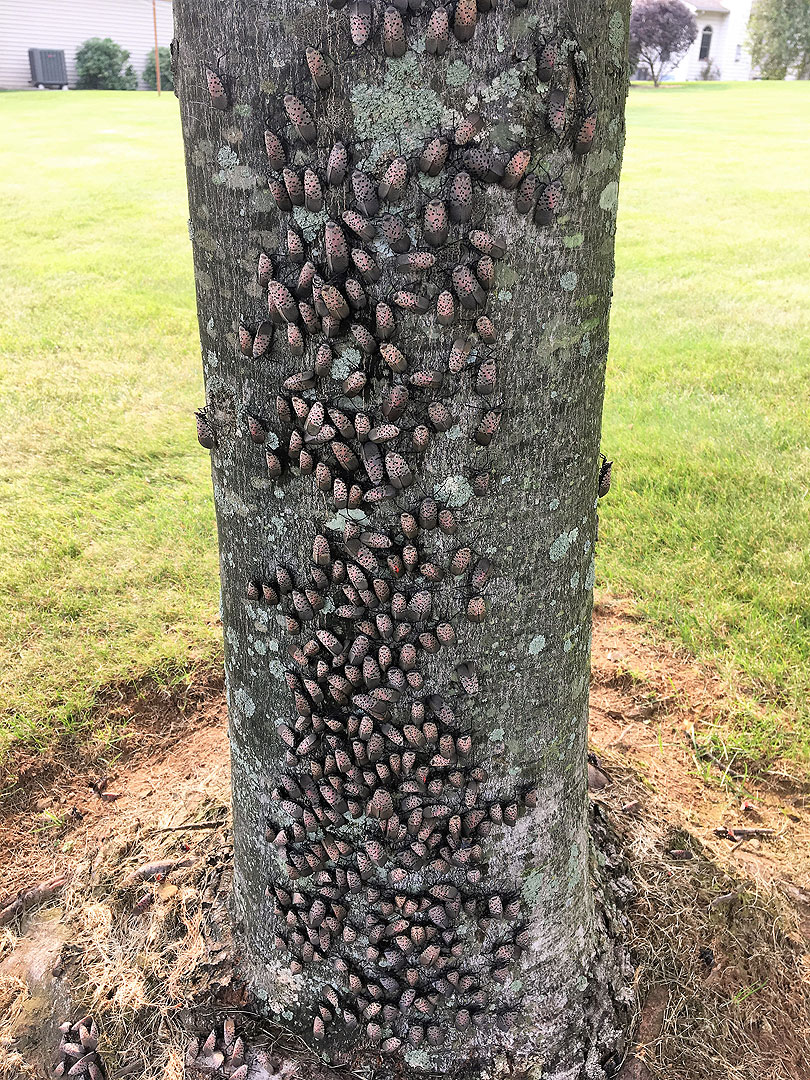 A grouping of mature lanternflies at the base of a tree. 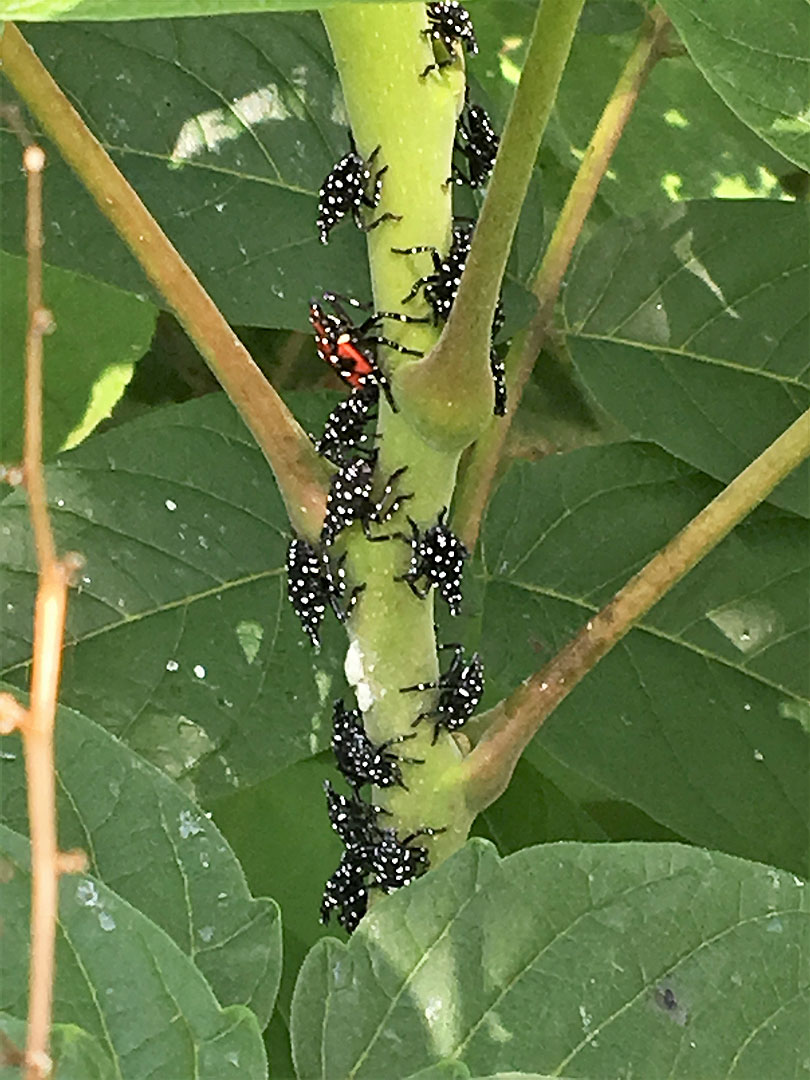 The young spotted lanternfly is black with white dots and develops a red color as it matures.

Small wounds that ooze sap will appear where the insects have been feeding. These wounds will seem to 'weep,' leaving a gray or black trail along the bark. Leaf curling or wilting will often occur as the insects suck the nutrients the plant needs for survival and growth. Feeding activity also results in the presence of honeydew, a sticky liquid that encourages the growth of blackish sooty mold.

The appearance of the egg masses differs depending on their age. Newly laid egg masses have a grayish protective covering. Over time this covering takes on a cracked appearance and will later expose the neatly laid columns of tiny brown eggs.

The insects themselves are also visible and can commonly be seen congregating at the base of host trees late in the day.

Egg masses can easily be scrapped off when detected and should be double-bagged before disposal. Keep in mind that the lanternfly will readily lay eggs not only on trees, but any smooth surface including stones, vehicles, yard furniture, or other items stored outside. Sticky bands can be used in spring and early summer to trap nymphs after they hatch.

Management should include removal of Tree of Heaven from the area, particularly given this species is also an invasive. A small number of male trees can be left to act as a trap to concentrate lanternfly populations so that appropriate treatments can be applied for best control.