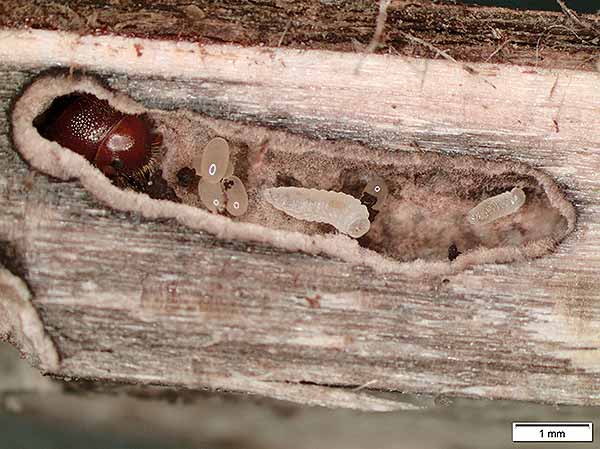 Gallery (with pupae and fungus) of ambrosia beetle. This invasive pest is a problem in many southern states, causing damage to fruit trees and ornamentals.

There are several different species of tiny insects called ambrosia beetles. These bark beetles are characterized by the ambrosia fungus they deposit within the sapwood as they burrow deep into a tree. Although most ambrosia beetles prefer dead and dying trees, several exotic species attack healthy trees. Unlike other bark beetles which inhabit the outer layers of a tree, ambrosia beetles burrow deep into the tree and dine on the symbiotic ambrosia fungus they cultivate there. The fungus, and the tree’s response to it, clog vascular tissue causing the tree to decline. 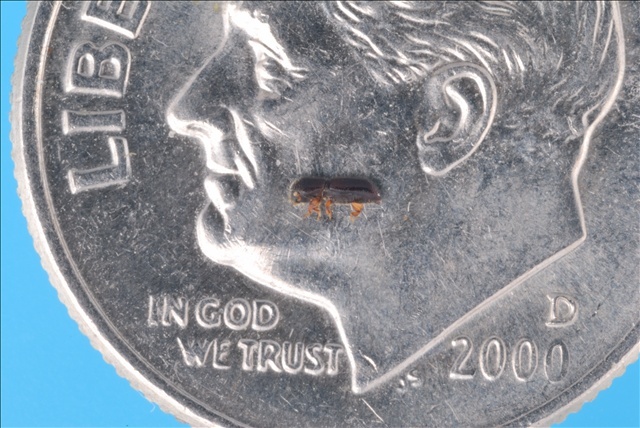 Though tiny, the redbay ambrosia beetle has been devastating to the southern coastal plains.

There are many native species of ambrosia beetle that typically don’t damage healthy trees. Two species from Southeast Asia however, the granulate ambrosia beetle and the black stem borer, have caused substantial damage to many species of healthy trees, particularly fruit trees and ornamentals. The granulate ambrosia beetle is more common and problematic in the mid-Atlantic and southern U.S., while the black stem borer is found in the Midwest and Northeast. Many southern states have also experienced damage caused by redbay ambrosia beetle, which has destroyed 80% of redbay trees in some areas by transmitting the fungus that causes ‘laurel wilt.’ They are a threat to avocado trees as well.

Ambrosia beetle adults attack in spring through fall, depending on the species. Ambrosia beetles develop through four stages typical to bark beetles: egg, larva, pupa, and adult. For some species, all stages overwinter in the wood, and other species overwinter as adults in the duff and litter on the forest floor. There may be one or multiple generations per year.

As ambrosia beetles bore into a tree, they typically leave a distinctive “toothpick” of compressed sawdust. There may also be fine sawdust (frass) collecting at the base of the tree. For those species of ambrosia beetle that attack healthy trees, branch dieback will be apparent, and sap or resin may flow from the wounds. 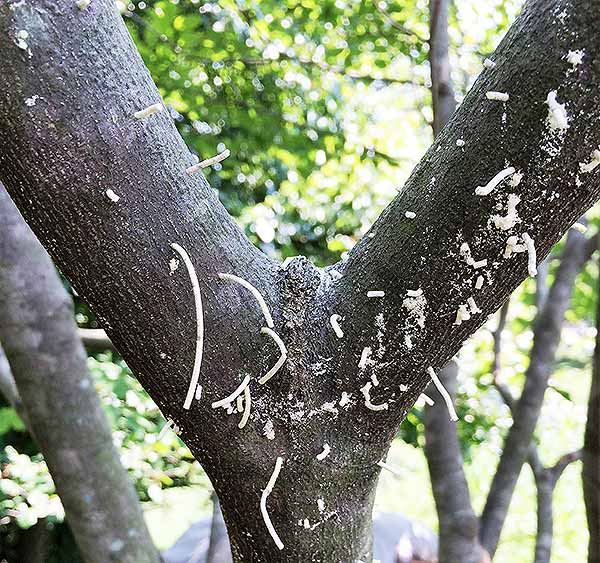 Healthy trees can typically resist infestation using their own defensive mechanisms. Therefore maintaining tree health and vitality through proper irrigation, mulching, soil management, and pruning is essential. Unfortunately, ambrosia beetles are difficult to control once a tree is infested, and prolonged infestation will kill the trees. Although there are no biological agents that help manage ambrosia beetle infestation, there are highly effective preventative treatments available.