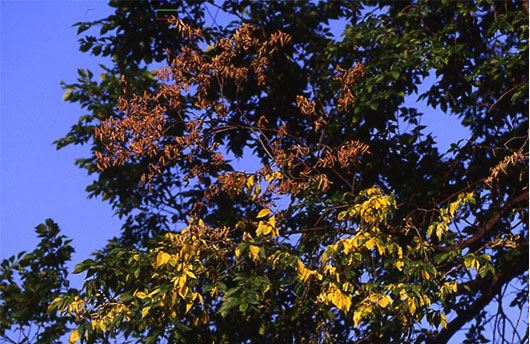 Dutch elm disease (DED) is one of the most historically devastating diseases in North America and Europe. Millions of large, mature trees have been lost to this disease. Its introduction in the early 1900s changed the face of urban forests as elm populations were decimated worldwide.

American elm, Ulmus americana, is extremely susceptible though a number of cultivars have now been developed that show greater tolerance to infection. Asian elms are resistant and have been used in breeding programs along with American elm to help develop hybrids that display high levels of resistance.

The disease is caused by one of two fungal pathogens: Ophiostoma ulmi or O. Novo-ulmi. The aggressive fungus colonizes the plant's vascular system, inhibiting the transportation of water and ultimately resulting in death. While infection can spread via the root system of closely planted elms, its widespread nature is due in large part to bark beetles that move the fungus from infected to healthy trees. Native elm bark beetle, Hylurgopinus rufipes, and European elm bark beetle, Scolytus multistriatus, can carry spores of the fungus (stuck to their bodies) for several miles until they find a new host. 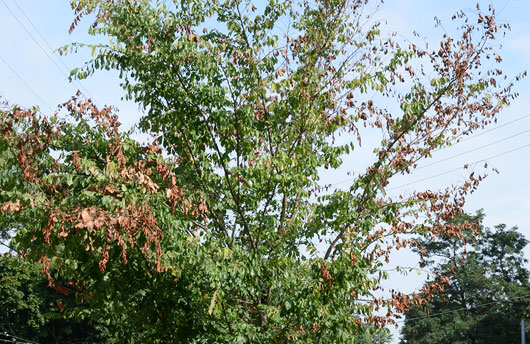 Wilting of leaves on a young elm tree. 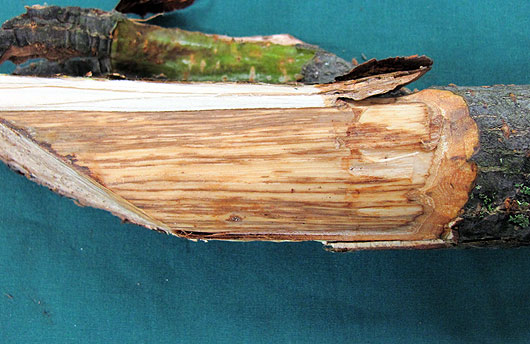 Brown streaks in the vascular tissue of an infected twig.

Wilting of the leaves is the first outward sign of infection. Leaves at the tips of the branches will begin to curl and turn yellow before falling off the tree. As infection progresses, the entire crown may be affected in this way.

Evidence of the disease can also be found under the bark. Brown streaking or discolored tissue in the outer layers of branches, stems and roots can be seen when the bark is peeled back.

Beyond planting of resistant elms, proper sanitation is critical to controlling Dutch elm disease. Immediate removal of diseased wood will help prevent spread to neighboring trees. Treatments injected into the trunk can provide systemic protection from the pathogen for one to three years.