The Ingram Amphitheater is a place for students

June 17, 2022 – Stamford, CT– Bartlett Tree Experts is proud to announce that the Ingram Amphitheater at the Penn State Mont Alto Arboretum has been dedicated in honor of Bartlett President and COO, Jim Ingram. 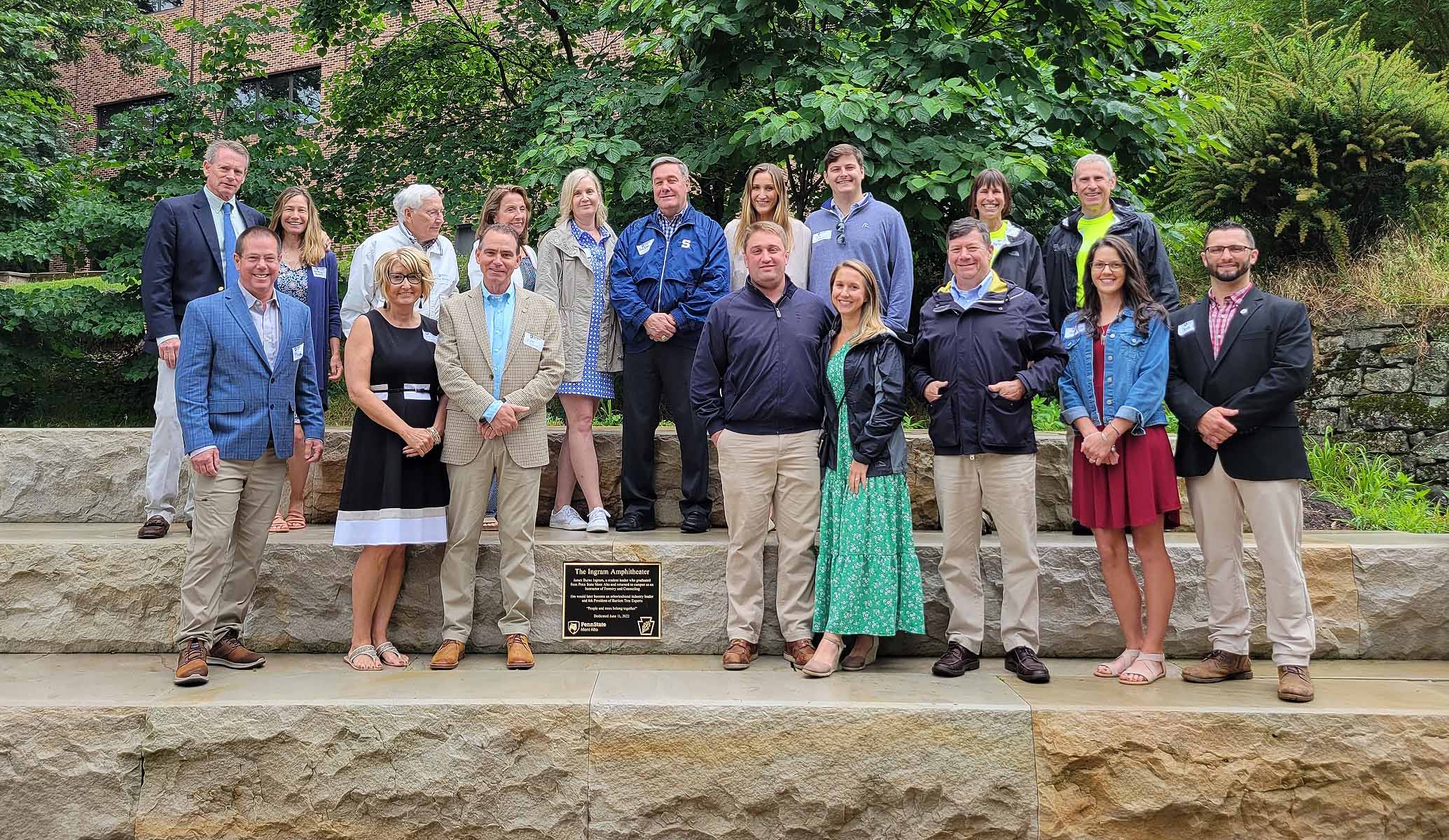 Jim Ingram along side colleagues, family, and friends pictured at the dedication of the Ingram Ampitheater

Ingram, an alumnus, philanthropist and volunteer leader who has been active in building philanthropic support for the University for many years, was honored with a dedication ceremony held on the Penn State Mont Alto campus during its “Greater Penn State for 21st Century Excellence” campaign celebration on June 11.

“I’m pretty humbled here,” said Ingram. “This truly is a place for students to invest time and energy in listening to and understanding others, a place where students can be grateful for the trees, a place to be at peace with yourself and your surroundings, a place that inspires students to constantly improve, and lastly, a place where students can observe and remember the small things about those around them; their strengths, their habits, their good qualities. That’s what a place like this does for people.”

Ingram holds two degrees from Penn State in Forestry and Agricultural Science. After graduation, he taught at the forestry school in 1981 before joining Bartlett Tree Experts. In 2020, Jim was Mont Alto’s graduation commencement speaker. For the past six years, Jim has served as the University Campaign Chair for Commonwealth Campuses. And recently, at the end of 2021, Jim and his wife, Barbara, generously funded a transformational endowment at Penn State that will provide resources to begin arboretums at all of the 24 Penn State Commonwealth Campuses. 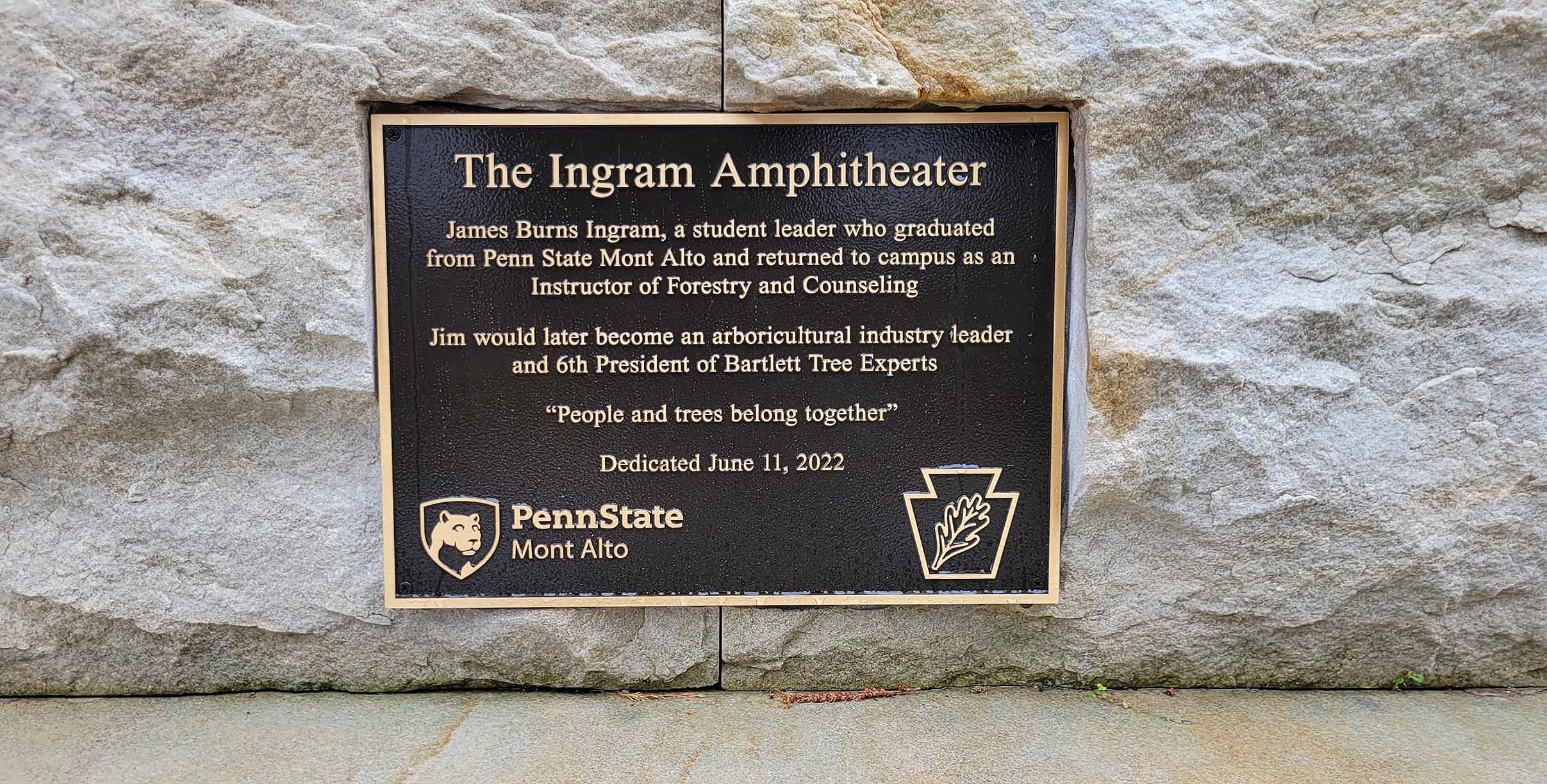 Students in the Forestry program can take advantage of the Penn State Mont Alto Arboretum, and now, the Ingram Amphitheater. Established in 1903, the arboretum a living, historic collection and outdoor classroom that contains more than 1,000 trees representing 29 families, 70 genera and 174 species. Jim was instrumental in establishing the Bartlett Tree Research plot, helping to conserve the original site of the historic 1903 Pennsylvania Forestry School Nursery.

In addition to inspiring significant support from his fellow Penn Staters, Ingram has led by example with gifts of his own, made together with Barbara. The couple’s support has created the Jack Ingram Endowed Scholarship at Mont Alto, named for Jim’s late father; and enhanced the arboretum at the Mont Alto and University Park campuses.

Alan Jones, Bartlett Vice President and Bartlett Foundation Director, said, “Jim has been a great coach in my career. He has consistently encouraged me, and many others, to volunteer and serve our industry. Jim’s leadership, passion and dedication led to his service on countless committees, task forces and organizations serving our industry, Penn State and the communities where Jim has lived and worked.”