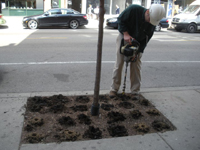 Researchers to see if biochar, a charcoal first used centuries ago, can help protect the urban forest – saving cities money

What: Application of biochar, a type of charcoal first produced and used in the Amazon basin centuries ago to make agricultural land more fertile, to the soil of Chicago street trees. The first time it is being studied in urban soils for the potential benefit of trees, though there has been extensive research worldwide into its benefits for agriculture.

Why: A large portion of street trees planted do not survive; of those that do, the average lifespan is 10 years - considerably less than a tree growing in its natural conditions. Street trees growing in soil pits surrounded by pavement suffer from limited root space, soil compaction, limited water and drainage, poor soil structure and nutrients, and pavement de-icing salts.

If biochar were to improve the growing conditions of urban trees, enabling them to live longer, its use could save municipalities and property owners in tree-replacement costs and help preserve valuable urban tree canopy.

Where: About 60 trees on Milwaukee Ave. in Chicago’s Wicker Park/Bucktown community.

This research is part of a larger urban-soils study that includes applications of biochar in greenhouse and field plot settings at The Morton Arboretum. The Bartlett Tree Research Laboratories have also been testing adding biochar to the soil mix when planting trees.

Who: Scientists from Bartlett Tree Experts and The Morton Arboretum, with earlier assistance from the Chicago Bureau of Forestry and Department of Environment, and funding support from The TREE Fund.

When: The Chicago street-tree applications begin in April 2011. The study will continue for two to three years.

Background: Biochar, a result of heating of plant waste at high temperatures, has been used for centuries to restore infertile soils. It also has tremendous potential for urban tree care. Urban soils often lack carbon, available nutrients and important microorganisms. Biochar is rich in carbon, which when added to the soil, can increase the number of microorganisms, increase nutrients and rebuild soil structure. It’s been called a “coral reef” for soil.

Biochar may also help address urgent environmental issues, such as water pollution, food insecurity, soil degradation and climate change. It puts carbon back into the earth, puts it to positive use in the soil and increases the amount of time it stays there, rather than allowing the carbon to be released into the atmosphere. Research suggests it is an ideal candidate for reducing climate change by indefinitely storing carbon and carbon dioxide.