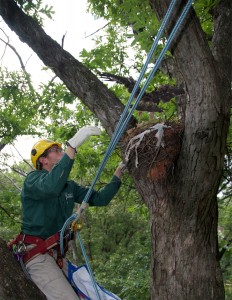 Suzanne Shoemaker with Owl Moon Raptor Center received a call from a Sam Petty about a raptor that had fallen in the road at the intersection of Vista Street and Central Avenue NE, Washington, D.C. The young raptor had broken his wing and was taken to Owl Moon Raptor Center to recover. When it was time to release the young raptor, Suzanne called Bartlett Tree Experts Washington, D.C. and spoke with Bill Eck about getting some help. You might be asking yourself, how can a tree company help in a raptor release? Suzanne explained to give the young raptor the best chances to survive was to put him back in his parent’s nest, which involves climbing to a height of approximately 35 feet. We sent two of our tree climbers down to Ms. Petty’s home where the nest was located. Jack P. and Nick S. listened intently on how to handle the raptor, they geared up to climb, and they took all the safety precaution to take the raptor up. Thirty-five feet in the air, they found the nest and secured themselves on a nearby branch and hoisted up the raptor in a basket. Jack carefully placed the raptor in the nest and it fluttered around in excitement to be home. Jack and Nick could also see another young raptor nearby watching them; he was most likely a sibling. Suzanne and Sam, on the ground, were thrilled to see the raptor they cared for be released.